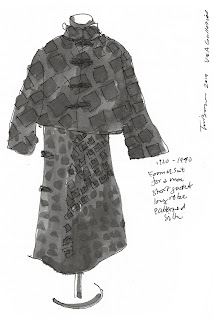 The V&A is a treasure trove of exciting things, in each and every room. Even at the weekends the place is civilised with a real sense of people making discoveries and enjoying the process of doing so.

The other Saturday I was there on a day's drawing course. At the lunch break I wandered into the China rooms 44 and 47e (The TT Tsui Gallery on the ground Floor) both were full on eastern promise.

I was compelled to make a drawing of an exquisite looking formal man’s suite in dark grey and black suite and another of a Zhongshan suit. 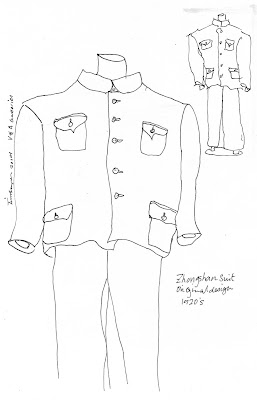 The Zhongshan suit was also known as the Mao suit was worn in the 1920s and 1930s by civil servants in China. Nearly all men wore it after the establishment of the People's Republic of China in 1949 until the end of the Cultural Revolution in 1976.

The suit’s design design has particular and remarkable cultural significance:

Using one piece of material for the back of the jacket with no break seam represents the reunification of the entire nation.
Four pockets on the jacket signify the morals of the four virtues: Propriety, justice, honesty, and honour.
The shape of the pocket covers represents a mountain, symbolizing respect for culture and the promotion of education.
Four buttons on the pocket covers represents the four common law rights to be enjoyed by citizens: Election and dismissal of the government, and the making and reviewing of laws.
The five buttons on the front of the suit represent the five constitutional rights, which are administration, legislation, judiciary, examination, and supervision.
The three sleeve buttons represent the principles of nationalism, democracy, and the right to work for your livelihood.

Many thanks to the Vision Times* Link to the full story on the suit
Vision Times tells the world everything about China in today's context. We keep a close eye on China because of its influence now and the lessons we can learn from its ancient past to better our lives today.
Posted by Tim Baynes Art at 19:03