DRYSLWYN: A CASTLE IN THE SKY

It was the last day in November and the sky was deep blue and the sun was high. Almost as high was the rocky knoll on which Dryslwyn Castles sits perched like a dark crow, its position is one of the most extraordinary defensive strength.

We walked up to the ruins to explore and draw. Looking north we could see into mid Wales and NE the Black Mountains. And to our SE was Paxton’s Tower, on an even higher hill.

A remarkable stronghold is Dryslwyn for many a Welsh lord struggling to come to terms with the Norman princes and later English prices who push their weight around with even more vigour and a ludicrous castle building program.

On Welsh lord was Rhys ap Maredudd who from his castle walls at Dryslwyn fancied a bit of fun and sallied forth, the outcome for Rhys was not good.

The Castles Of Wales Website picks up the story

A RUN IN WITH EDWARD 1 OF ENGLAND
Rhys ap Maredudd was soon involved in a series of bitter disputes with Robert de Tibetot, the new justiciar of west Wales (1281-98). The situation rapidly worsened, and in June 1287 Rhys suddenly attacked and captured the castles of Dinefwr, Carreg Cennen and Llandovery. The constables were slaughtered, and many defenders left for dead. 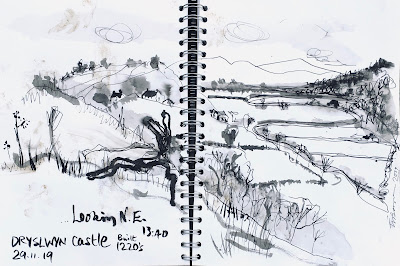 The English response was swift and immensely powerful. A great army of some 11,000 men was raised in various parts of England and Wales, marching to Carmarthen to assemble under the king’s cousin, Earl Edmund of Cornwall.

From here, in the second week of August, they set out to lay siege to Dryslwyn Castle, where Rhys had established his defensive headquarters. The siege is particularly well known because of the relative abundance of documentation.

The castle fell after three weeks, during which time Dinefwr Castle had also been retaken. Rhys himself fled, but after a few more years of resistance he was captured in April 1292 and executed at York for treason.