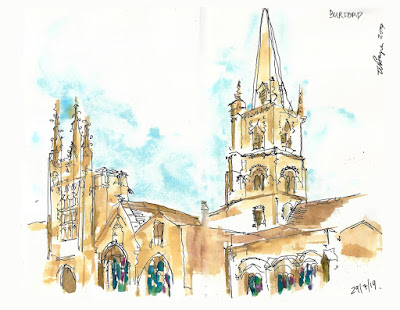 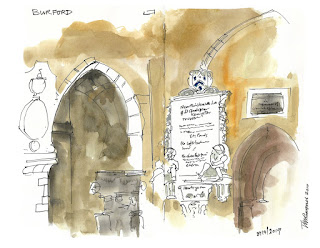 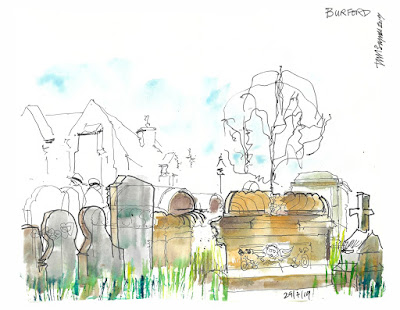 A lovely sunny day for the Cotswolds and everyone else thought so too. Off the A40 to Cheltenham, Burford was heaving with visitors, all enjoying the Farrow and Ball quaintness.

Escaping the high street is St Mary’s church. A huge box of chocolates, St Mary has it all: tombs, monuments, chapels and shrines. It survived the reformation and Cromwell’s stampede and also a drastic C19 assault by A G Street.
https://www.burfordchurch.org

There is lots to cherish here and don’t miss the bale tombs immediately outside the south door.

As we retreated from Burford where a fight broke out over our parking space. The Swan Inn in Swinbrook provides a quieter place to enjoy a pint and their last packet of crisps.

And on to Chipping Norton, St Mary Chipping Norton is reached down a precarious lane that runs down to the river. We were negotiating local vehicles and Dutch number plates. 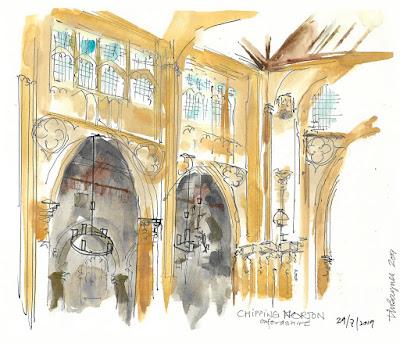 Like most of the churches here about St Mary owes is loveliness to the wool merchants of the Middle Ages.  The Perpendicular nave reaches heavenwards and remarkable windows let in so much light as to make this God’s greenhouse!

Most of the church is in the Decorated style, when English stonemasons and wood carvers were walking on water. Slight disappointment was the AV screen, a popular feature in modern church going, obscures the view of the chancel roof and most of the East window. Diuma, a wandering Celtic evangelist, who died in Charlbury in 658 A.D, first brought the Christian faith to this community. So in the grand scheme of things the PowerPoint screen is but a transient distraction