So everyone was looking disconsolately at his phone over breakfast.  It was not actually raining although every weather app said it should be.
However ‘rain before 7 fine before 11’ my grand mother used to say.

The boys headed out of Havelberg I was not far behind them. I had wanted to visit a church however it was closed however the porch had an interesting stone monument so I consoled myself by making a drawing. By the time that was finished and the market stall holders had set up it was brightening up.

Again this was a comparatively short day cycling and by noon we were at our meet up in Rühstädt a small village widely known for its stork colony.

We saw storks in or around improbably large nests precariously balanced on a chimney tops. Then we had coffee to celebrate the birds and the sunshine. 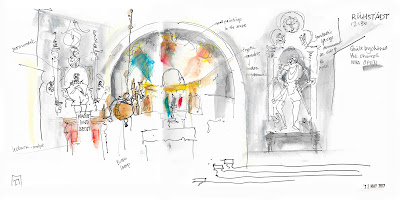 This was a lovely village, again hardly a soul about. In the centre was church and its neat tidy churchyard. In Germany family members are directly responsible for the maintenance of burial plots of loved ones. At the far end of the churchyard was an orderly collection of tools and watering cans. Several times someone would enter and attend to a particular plot.

Early afternoon saw us in Wittenberge, the final destination for this week. Once settled in (Hotel Germania) we assembled for the customary afternoon ice cream. Afterwards a tour round the town, medieval, mock-Gothic and Communist building styles nestle up against each other with blocks of flats close to the Theatre of Culture. Often we saw residential blocks close to very much older parts of a town or city.

The last supper was another plate of asparagus (spargel) and wine for a change – bikes were garaged for another year and the boat was pushed out!

See all the drawings here http://bit.ly/elbe2017