DUTCH DIARY: TO THE ISLAND

Tuesday and after the breakfast that fulfilled its promise we did the 20 km sprint north west towards Lauwersoog the fishing port from which the ferry to the island of Schiermonnikoog  a sixty minute crossing. 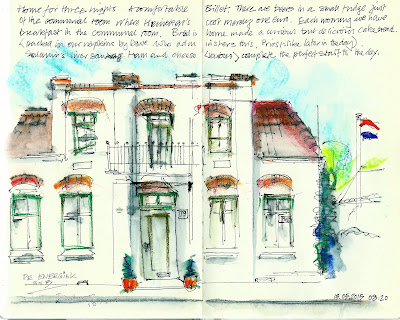 There were grey skies today and a wind from the west that was going to make heading west a challenge for our remaining time here.  The ferry was packed with people but the throng quickly dispersed on as we pushed our bikes down the gangway and onto a cycle path around the island.

This small island shaped like a leg of lamb with all the habitation at the westerly fat end of the ‘leg’. There are colourful and charming houses; it boasts a population of about nine hundred that swells considerably in the summer.

Schiermonnikoog has wide beaches and white sands, inland there is low heathland and short trees mastered by the wind; two grand lighthouses north and south watching for shipping.

Sun breaks through as we take lunch at the De Marlijn beach restaurant, full of prosperous looking red faces sporting expensive sunglasses. After a fine salad we walked it off on the beach before a circuitous route back to the afternoon ferry.


On landing we headed home, hugging the coast for about 10 km then heading inland through farms and fields and villages washed in bright afternoon sunlight. The wind was behind us propelling us to the first beer of the evening.


End of the second story, coming next DUTCH DIARY: FISH AND CHIPS