The Norfolk Broads comprises of 200 miles of Fenland walk away.

These waters are homes to the direst looking boats you will ever see on any water. Thankfully The Broads are also home to some of the prettiest. I include my friend Richard’s boat in the latter category.

The other week I got the call that the tide and weather conditions were right to move the boat  - yacht called Aerial to more conducive waters, a part of the boards that would be more fitting for a boat so pretty (see footnote). 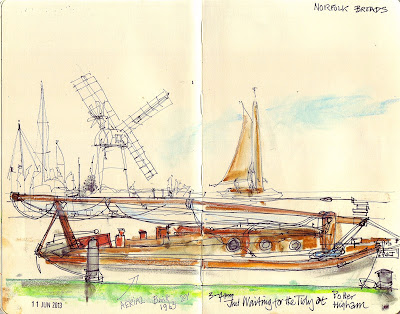 We drove up to Essex in Suffolk and late Monday evening was on the boat having watered and any diesel ready for a very early start the next morning.

Tuesday morning Dawn bright and clear and we were soon out with them all through the waterways of the river Yare with its reed banks stretching miles in each direction from the bank.  The occasional dilapidated windmill, once employed to drain these waterways or keep them in good condition stood sentinel-like on our banks. There was not a soul about as we motored quietly into the sun. We crossed that broad expanse Breydon Water and on through Great Yarmouth and back round on ourselves to another river, the Bure. 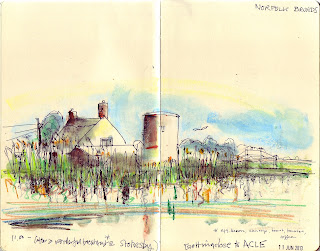 Mid morning and we were ready for breakfast so pulled up at the lovely Stokesby and had a hearty meal in the Riverside Tea Rooms and Stores. Fortified, we went forward along the river Bure.

We took a small kip on the boat and then on the River Thurne to Potter Heigham with its impossibly low medieval bridge. This gave us cause to tie for an hour or so waiting for the tide to drop. We eventually passed under this bridge famous for being the most difficult to navigate in the Broads. Phew!

On past our new mooring at Martham by late afternoon and then across and up narrow channels to Horsey. We moored up and walked across the fields to the most excellent Lord Nelson Pub in Horsley; Fish and chips entry points of each. It’d been a long day, with the weather in our favour and other craft to minimum. We’d made good passage and now the dog-tired we went back on board and crept into our sleeping bags, soon asleep. 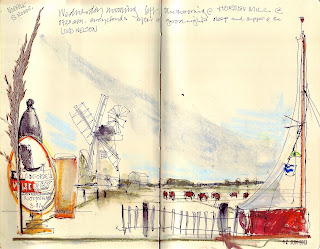 Footnote:
Aerial – a commentary from Richard
She restored by a retired gentleman in Yorkshire from 1991-1999 being rescued in a sad state from Burgh Castle and transported to Yorkshire. There she resided in an old WW2 hut previously occupied by German Prisoners of War. Leo Robinson at Olton Broad built aerial prior to 1935 as she appeared in the Blakes Catalogue for 1935. She was a well-travelled boat being available for hire on the River Avon after WW2. She has a sister boat called Radio sadly her whereabouts is not known. 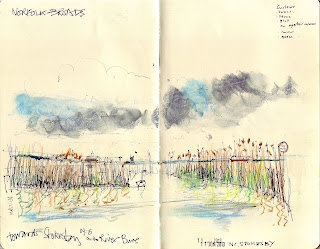