Rosie and I have just returned from a good walk down to and along our estuary. Almost every day we gaze across the water and land and marvel. Every day it is different, changed by the weather and the weather’s constant companion, light.

At low water the mud flats and retreating waters leave their swirling impressions.

From the base of Laugharne Castle we cannot be more than a mile from the opposite shore. In times gone by farmers would row across for an evening drink at The Three Mariners or The Fountain Inn.

Like so much around here it beguiles. The idea of land touching water is timeless continues inspire so many; Just to gaze or respond by taking a picture on one’s phone as I see people do most days.

It is not hard to see why estuaryland inspires*. Part of an estuary’s magic is its being a transition between a river and connected to the sea. Influenced by the latter is tides and a daily dose of saline water and responding in kind with loads of freshwater and sediment from the land. 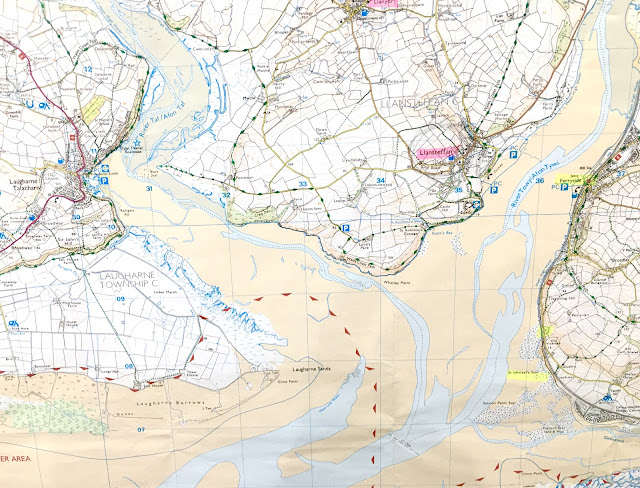 Estuaries are, it seems, amongst the most productive natural habitats. Little wander oystercatchers, curlews and other waders constantly patrol and harvest from these shifting grounds.

‘It is a land that is not earth, air or water but an amalgam of all three’

Source: My Brief Eternity a film by Clare Sturgis that documents the making of the last artistic work of Osi Rhys Osmond, which he chose to create for Maggie's cancer charity, Swansea.