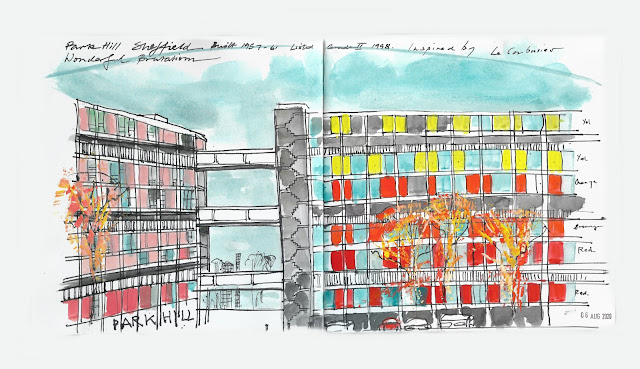 After WW2 there were many brave housing schemes launched across the UK.

In Sheffield back-to-back housing, where up to 100 people were sharing one standpipe, was swept aside to make way for the Park Hill scheme.

Later on, like so many housing schemes in the UK in recent times, those responsible for the upkeep of public house where unable to do so effectively. By 1998, at Park Hill  English Heritage stepped in with a Grade II badge.

A program of regeneration began. In 2013 developer Urban Splash’s scheme was short listed for a RIBA Stirling Prize. This September student accommodation, as part of the scheme, opens.

In 1953, architects Jack Lynn and Ivor Smith started their design for Park Hill, inspired by Le Corbusier's Unité d'Habitation. Old street names from the area were reused and neighbours were re-homed next door to each other. At the time it attracted interest and visitors from around the world.

The flats and maisonettes, 3 pubs and 31 shops were built in 4 ranges linked by bridges across the upper decks. The ranges of flats were canted at obtuse angles (see diagram)  to maximise the panoramic views across the city and the southern Pennines.

Park Hill remains in the pantheon of significant architecture of the Modern period.

Today apartments in the refurbished parts of Park Hill are available now.

Park Hill is back! Live in a stunning new home with VIEWS OVER SHEFFIELD and a private residents GARDEN! They are MODERN, high quality, they have huge windows. City facing!  £250,000 from Urban Splash on www.rightmove.co.uk