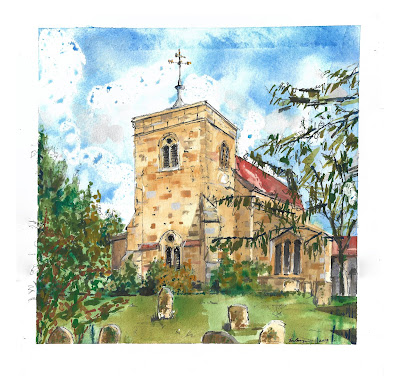 My painting of Brill Church was a pre-Christmas commission, a timorous watercolour, from a sunny photograph, turned out quite well.  I was keen to discover more about this place

All Saints’ Church sits on a hill in the village and apparently this lovely church started life as a royal chapel to an adjacent royal palace in the 11th century. Edward the Confessor* owned the parish at one stage.

The earliest part of the church is the nave, built in the 12th century (Normans were soon at  it) and over time it has been altered. A Mr J. Oldrid Scott rebuilt the entire church in 1888, with the good sense to incorporate some of the older bits.

‘The doorways have been restored in the resetting and more recently, but enough original stone remains to confirm their form. The fat angle roll and cushion capitals are typical of a date in the first two decades of the 12thc.’

© 2020 The Corpus of Romanesque Sculpture in Britain and Ireland   Please discover more about Brill on this wonderful website https://www.crsbi.ac.uk/site/946/

*Edward the Confessor was the first Anglo-Saxon and the only king of England to be canonised. He ruled from 1042 to 1066. Edward was the son of Æthelred the Unready.
Posted by Tim Baynes Art at 18:49