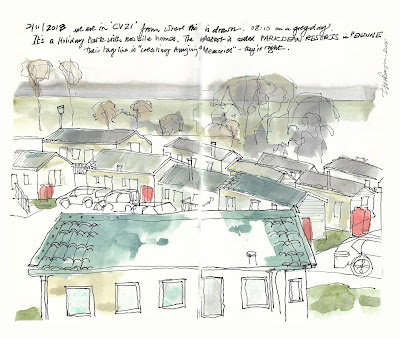 Row on row the serried* ranks of mobile homes stand contemplating the grey November sea. We are staying in Pendine Sands Holiday Park.
They are called holiday homes with ‘double glazed and domestic style central heating’.

Site owners Parkdean resorts have you covered. They own 66 parks around the UK.

These are caravan holiday homes, towed into place and parked up on blocks. This has been a popular business for more than 50 years and there are at least 23,000 such homeowners around Britain.

For us it was an experiment, a way to explore another accommodation avenue near Laugharne and closer still to Pendine Beach.

The caravan we stayed in was well appointed, all the fixtures and fitting and equipment appeared new, in the bedrooms (3) there were cotton sheets duvets and good pillows. It was comfortable and toasty warm and with a sea view, just. The model was called a Trieste and sells for £36,995.

The stay was spoilt by the much-heralded Wi-Fi service not being available in our place. There is no phone signal; the reception desk murmured something about the MOD presence in the area not allowing it. 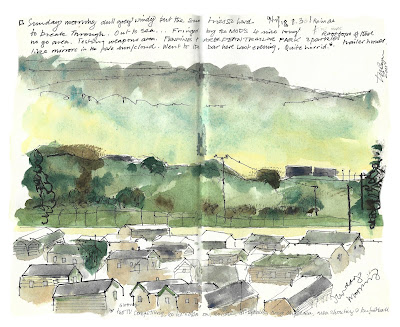 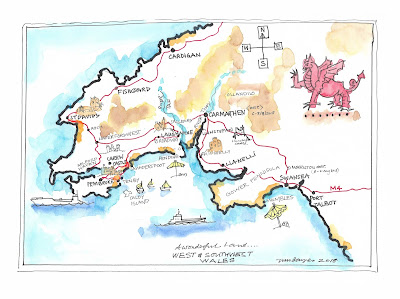 On our second evening we went into the Bar to use the camp’s Wi-Fi and were greeted by screaming children, no lime or lemon for a gin and tonic, filthy tables and dads shouting at the football game on TV. They had to shout perhaps because there were two TVs on competing for attention.

One TripAdvisor contributor said in August Don’t bother complaining, as it won’t be dealt with and you will be called a liar and greeted with an attitude even from the so called manager at the Park!

It was a mixed experience, to stand outside on the deck that adjoined our caravan and look out to sea in the early morning, wonderful. Inside our rented home was warm and lovely. Time in the camp bar was abhorrent. Our stay was game of two halves.

*Mid 17th century: past participle of serry 'press close', probably from French serréz 'close together', based on Latin sera 'lock'.