A GRAND CASTLE IN A VILLAGE: LLAWHADDEN

There is enough left to imagine how glorious Llawhadden Castle was in its heyday, the 13thand 14thcenturies. The entrance towers soar above you, impressive, imposing. 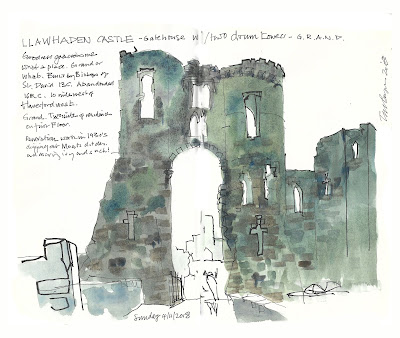 The Bishops of St David’s built this castle. It was a sort of second home, or third or forth. They were keen out putting places up so there had somewhere to stay when they were touring their patch. Each bishop made Llawhadden grander as the years rolled on.

However in the 16th century the place was abandoned; the last incumbent was short of cash and sold the roof. Llawhadden’s decline was part of the chaos that occurred at the time of the Dissolution of the Monasteries. Thereafter much of the stone was purloined for buildings close by, a common practise in those times.

Curiously enough a squad of workmen, drawn from the ranks of the unemployed, organised by the newly established Ministry of Works, set to and smartened what was left up, clearing the moat and ditches, removing ivy and undergrowth, well done them.

On the morning of our outing here it was wet and dull, yet these magnificent viridian coloured stones sparkled in the moist air giving a clear sense of how splendid Llawhadden once was.

More on these wonderful stones here http://www.wikiwand.com/en/Llawhaden_Castle
The writer is a regular donator to The Wikipedia Foundation
Posted by Tim Baynes Art at 19:30