1. Sunday evening is a tense time of the week to travel anywhere - knowing one is going to arrive in darkness in some city that is quiet and sombre.  My Alitalia flight was delayed by two hours one of which was spent in the plane on the tarmac. 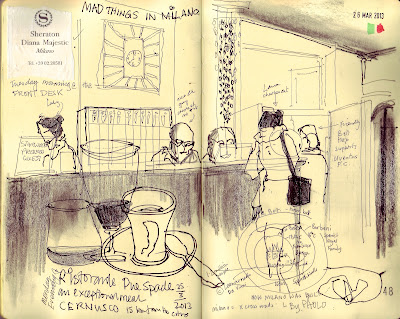 2. ‘Magnificent Majestic’ is what I say: The Sheraton Diana Majestic is a hotel of about one hundred years old; similar, funnily enough, to the Intercontinental in Roma. It is full of Empire-style dark furniture and gilt, large mirrors and huge doorways abound. I arrived there on Monday at one in the morning and tumbled into my lovely bed.

3. Miracles in Milano or rather fifteen kilometres outside Milano: The restaurant was in Cernusco sul Naviglio where local colleagues entertained us to a wonderful meal at the Ristorante Due Spade link here I enjoyed a memorable meal of squid on a bed of potato and broccoli, an exceptional seared sirloin steak that hard barely seen the grill, and the ice cream was made especially for us. Heaven was completed by chocolates and espresso. All accompanied by Chardonnay from Gorizia (Vipava Valley) and a lovely red from the Naples area. Awoke feeling refreshed.
4. Moleskine has a shop in Linate Airport. Another feast.

5. More delays on the flight home, a mere thirty minutes, and a new Alitalia tactic: instead of spending time on the plane spend time on the airport bus with a special tour of the tarmac to your plane.

The madness and miracles of short-haul.