56 Leonard New York is also known as the Jenga Tower. It is another exciting example of affordable housing, overlooking the Hudson River. Eight hundred and twenty-one feet (250 m) tall, its 57 stories are served by 10 elevators. 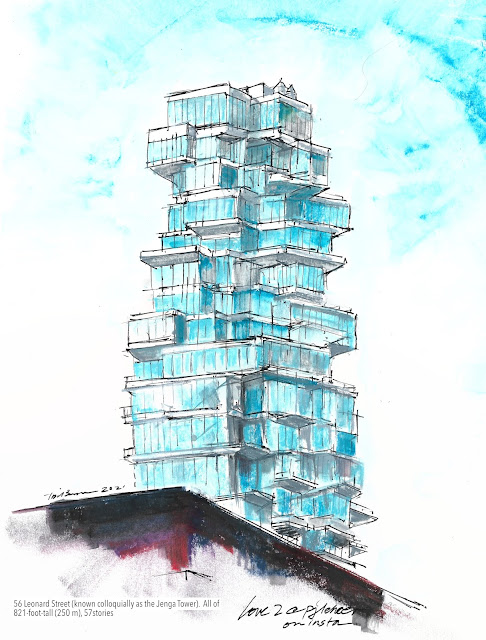 The building in this drawing is from a photograph by PJ Lehrer’ looks like a teetering tower of perspex boxes.

Further investigation shows it was designed by my favourite Swiss firm of architects, Hezog + Meuron. Their considered description for the building is found here.

From which this lively narrative is taken:

‘Together these different strategies – considering the tower from the inside-out, responding to local scales, and maximizing the potential of local construction systems – produce a building where only five out of the 145 apartments are repeated. Furthermore, no two floor plates are the same, giving those who will live in this project their own unique home characterized by distinct moments of individuality within the overall stack’.

The building’s back story is nicely introduced in Wikipedia https://en.wikipedia.org/wiki/56_Leonard_Street