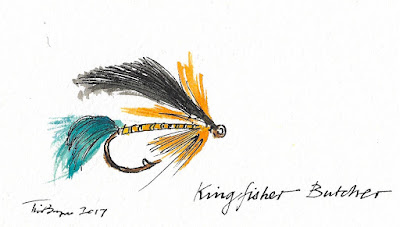 Daisy Siggers, head designer at posh outfitters Frank and Grace https://www.frankandgrace.com
asked that I illustrate this fly as a motif for some fabrics they are creating and F&G.

A nice commission and I was intrigued as to whether this dry fly had any history….

It appears that Messers Moon & Jewhurst of Tunbridge Wells, created this dastardly lure in the seventeenth century.

It was originally named 'Moon's fly'. However in 1838 it was renamed 'Butcher' after the their trade as butchers. The colours of their trade being white and blue apron splattered with blood.

The slick of turquoise on the fly signifies its ‘kingfisher’ moniker.

For fly fishermen the Kingfisher Butcher has continued to be a killer for the best part of two centuries on still waters and rivers.
Posted by Tim Baynes Art at 19:04