Essex boasts some of the most exciting coastline in Britain. The architect and the artist were up for another jaunt. I decided that three special seaside towns in the county should be visited. Furthest up the coast is Walton-on-the-Naze, in the middle is Frinton-on-Sea and then Clacton-on- Sea,  all were our ports of call. 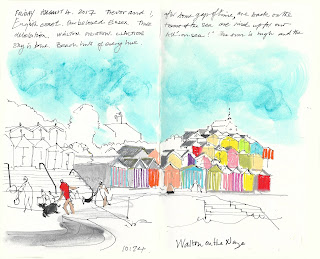 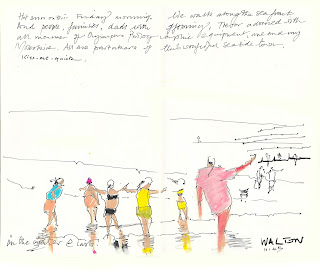 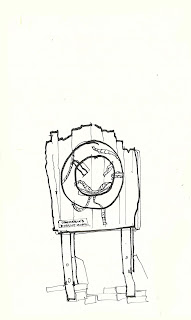 Walton-on-the-Naze; the word ‘Naze’ derives from Old English ‘næss’ or ‘ness’, meaning a promontory, or headland’.  I always think of ‘naze’ as meaning ‘nose’  - same difference. Daniel Defoe, visiting Walton before us, in 1722, referred to is as it ‘Walton under the Nase’.

Walton boasts a fine Pier. The first version was built in 1830. And is one of the earliest in the country. The pier was damaged in a January storm in 1871. They built another and that did not last long either.

In 1895, the Walton-on-the-Naze hotel and pier company (then owners what was left) opened a replacement pier 500 feet long and with several extensions it became the third longest in the UK. With this makeover they included an electric tramway to take passengers from steamers to the very end of the pier. This was in use until 1935. In 1945 a massive fire damaged the pier. A diesel locomotive replaced the tram – this too was taken out of service in the ‘70’s.  So, now we all walk. And this was lovely in the sunshine.