A Sistine Chapel in Stanmore 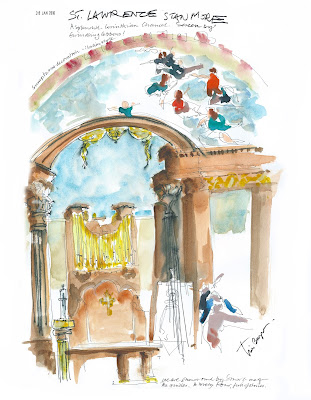 Just up the road from the solemn face of Edgeware is the church of St Lawrence.

The medieval church was swept aside by James Brydges, 1st Duke of Chandos who commissioned a remarkable building the baroque style.

The architect was John James, who also worked on the Duke of Chandos' nearby home, Cannons (demolished 1747). (Now commemorated by Canons Park Underground Station) It is likely that James Gibbs oversaw the finishing touches to the church when he replaced John James as the Duke's architect in 1715.

Inside there are some early eighteenth-century paintings, in the Italian style, by artists including Louis Daguerre.

On the north side of the church is special mausoleum for the Chandos family. The centrepiece is a massive memorial to Chandos and his two wives. The Duke is portrayed in Roman garb, in a suitably heroic pose.

Stuart gave a tour round the church to us; he is one of guides attached to the Parish Office. His knowledge of the church was bottomless and his affection for the place palpable.
Posted by Tim Baynes Art at 18:30