Middle Whites, lovely to look at. 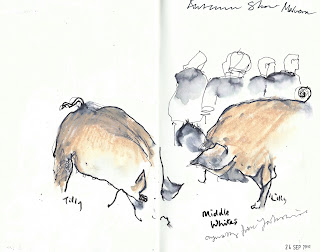 Billed as the ultimate harvest festival on Saturday 24 and Sunday 25 September, at the Three Counties Showground Malvern, the Autumn Show was the place to go.

The high spot for me was the livestock on proud display including the Middle White Pigs,


In 1852 at the Keighley Agricultural Show in West Yorkshire where Joseph Tuley exhibited several of his famous Large White sows.

However when it came to the judging some of the animals were considered too small for the class but “as the merits of these pigs were so extraordinary", a committee was summoned who decided the pigs were also not eligible for the Small White class.

So, as a result, a third class was created called the “Middle Breed” and so the Middle White was born.