We resume our quest outside the railway station at Staines (on-Thames) having captured a bargain, a Group Return ticket from Windsor and Eton Riverside station.

It is the last day in October with melancholy skies of course but no rain. Now the cycle ways are now often tarmac. We swap the lumps and bumps made by cattle and horses hooves for local council speed bumps. 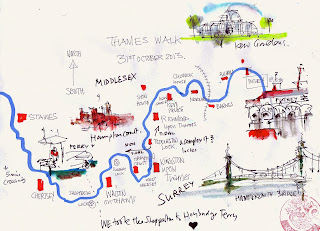 Across this stretch of the Thames Path are strewn the leftovers of Monday’s gales; up rooted poplar trees with great roundels of earth still attached, willows left low as if to sip from the river, we make a diversion through drab council flats to regain the path further down.

The riverbanks are now fringed with swanky dwellings, bungalows and pre-fabricated chalets. We pass through Classy-on-Thames: Chertsey and Weybridge. For £3 each we make our first ferry crossing at Weybridge, a fast buck for the Aussie ferryman. 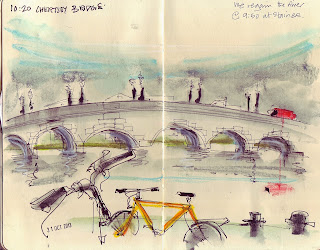 Hampton Court Palace’s towers are hidden in polythene and the bridge is choked by traffic. We are more than consoled by a large and excellent ‘late breakfast’ at the Hampton Court Café. 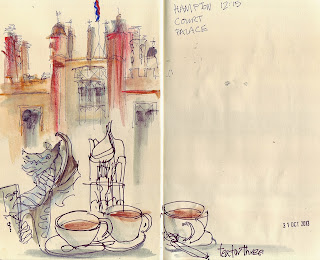 After lunch Kingston Bridge confuses us with a cycle lane that carries us across four lanes of traffic. For a moment we are separated, I regain Mike and Dave using the lift down to John Lewis’s car park, by pressing the ‘R’ button, a lucky guess.

By two o’clock it almost feels dark. Out on the brown-grey water Eights and Single Sculls skim upstream. We peddle by their cavernous boat houses crammed with sleeping craft, oars and other paraphernalia associated with these human water boatman.

Richmond, Teddington, Twickenham, Kew, Chiswick and Barnes, under their bridges; often the river is hidden from view. 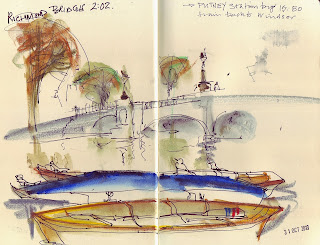 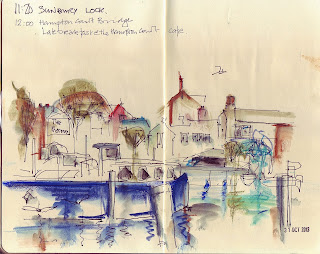 All of a sudden like some colossus, Hammersmith Bridge rears up in front of us. It pale green wrought iron appears to form the gates to London. To my mind we are certainly at the entrance to this river’s principal city.

So we leave the river, making our way through posh Putney terraces and twilight to the railway station.
Posted by Tim Baynes Art at 20:48